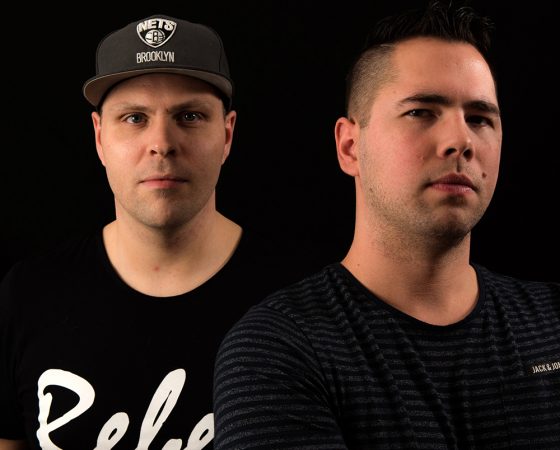 Enzyme Records is coming back with a vengeance introducing new artist after new artist, with many more coming soon. This time, we are proud to introduce not one, not two, but three united members, ‘Nocturnal Ritual’ to our crew! Let’s find out where they’re coming from and what their intentions are with their new platform!

Nocturnal Ritual has become the newest addition to the Enzyme Records crew, let’s find out who this group is and where they’re coming from.

Hello world! ‘Nocturnal Ritual’ is a group of three people – Dave Paalhaar, Manuel Kuijpers and Tim Paalhaar. We are all from the East of Holland (Oldenzaal/Hengelo), and met each other through our musical backgrounds. Manuel is a DJ and has an event organization that focuses mainly on parties at Metropool in Hengelo where he had booked us a few time, that’s how we became close friends and still are this day.

Your names are no stranger to the long time Hardcore diehard fans out there. Explain to your newer audience who you were and where you’ve come from.

Dave and Tim used to perform and produce under the names ‘T-Junction & Rudeboy’, as well as ‘Eastside Connection’. We produced tracks like “Cosmic Dreamer’, ‘Trigger My Element (Bassleader anthem)’, ‘A New Level of Freak’, ‘Take the Power’, ‘Against All Odds’, ‘What’s up With Life’, ‘Culture’, ‘Stomp’, ‘Midnight Massacre’, ‘Superior Minds’ and many more, released on The Third Movement and Masters of Hardcore labels. We’ve also performed at plenty of big parties and festivals like Thunderdome, Dominator, Masters of Hardcore, Q-base, Decibel, Deqon1, Syndicate, Bassleader, Fantasy Island and Hardshock.

So if our names sound familiar, that’s probably why haha.

We imagine that this is a difficult question for any established name in Hardcore to answer, but what are your most beloved memories from your career?

Our best memories, damn that’s a tough question. There have been so many incredible highlights throughout years, but to name a few: the tours through Australia were awesome, same as the gigs in Scotland, Spain, Germany and Italy.

The performances at Thunderdome, the mother of all parties, were of course, an honor to perform at. Bassleader, which Tim (T-Junction) had the privilege to make the anthem for, MOH and Dominator, hmm honestly, we’re all just really passionate about performing for a crowd that loves Hardcore as much as we do. Big or small, we don’t care, as long as the crowd goes wild!

So you had established yourselves on the biggest, and most respected labels in Hardcore with your previous names, why change to ‘Nocturnal Ritual’? Where did the name come from?

Well, collectively speaking, we had the feeling that we were totally stuck in Hardcore and we needed to clear our heads. The end result being that we decided to do something totally different for a while. We discovered a fresh new sound called ‘Subground’ and were really inspired by guys like ‘Geck-o’ and ‘Acti’, but in the end, we discovered that it didn’t totally match our style, so we decided that we would start our own label, which is now called ‘Audiouce’. That project has resulted in a lot of versatile productions by some very talented producers.

The fact that all 3 of us became father’s of some lovely kids in almost the same time period also had a lot to do with us having a break from the Hardcore scene over all. Our lives changed big time, in a great way of course, but we all needed to find the balance between our family lives and our music, and our families were our priority.

In the meantime, we were still interested in Hardcore of course, but we followed it from a distance when, out of nowhere, A.L.E.X.Events in Germany contacted us and asked if we were interested in doing a performance for them, as well as being responsible for producing the anthem for “A Nightmare in Germany” and that’s what triggered the Hardcore drive in us again. On top of that, ‘Unity Radio’ has to be mentioned as a form of inspiration as well, listening to their shows and hearing all the new and fresh productions in the DJ sets really got us excited to get back into the scene again. After the gig “A nightmare in Germany”, we decided we wanted to do Hardcore again, but we decided that we wanted to make a fresh new start. We also acknowledged that we needed new input from someone with fresh ideas, someone to complete the team. We instantly came up with the idea to ask Manuel. We knew he is a skilled DJ and that he knows his way around Social Media and building websites, so this would absolutely be the perfect addition to the team. Manuel was excited from the beginning, so we met and had a brainstorming session. What the name of our group would be was an issue, we had a lot of ideas for it but we couldn’t agree with each other. Until one day one of us comes up with the word “nocturnal”. “We should use that in our name!” everyone agreed, but the word alone wasn’t enough. That’s when we remembered an awesome track by Mr. Tommyknocker – ‘Nocturnal Rituals’, and that had to be it! ‘Nocturnal Ritual’ was born.

In the mean time, Dave still had contact with his good friend Mick (Accelerator/Rapture), who we had known from our time at MOH records and Mick asked us if we would be interested in releasing on Enzyme Records. We thought it was a very cool opportunity and made a appointment to see Patrick and Andrea. We talked for a while, discussed a lot of stuff and asked what each other’s expectations were. We must say It felt good from the start and here we are.

Your debut on Enzyme Records will be on Enzyme 65 – LMNT 3 which will include a single track from yourselves, that will be released in the middle of October. What can we expect from your renewed selves?

The track can best be described as a fresh and modern sounding mainstream banger, but different from our earlier productions because we’ve used newer and higher quality software and equipment than we did before. It’s very atmospheric and deep but simple and effective at the same time (is that even possible? YES! haha). The name of the track (Mindbender) was made up before we started to build the track, because of its bending lead-sound. In addition, we found this vocal in our database and it matched the name of the track perfectly, so we are pretty satisfied with the final result and hope that it gets picked up by the audience and our colleagues.

Is ‘Mindbender’ the sound that we can expect more of? Is this your new signature sound?

Yes and no. Yes of course you can expect fresh mainstream tracks from us, but we’re also going to try different styles then you’re used to hearing from us. Hence the re-branding.

For example, Manuel is a real love of the up-tempo sound and he’d probably kill us if we didn’t make a few up-tempo slammers haha. Tim is a big fan of the darker melodic stuff and the good old ‘Artcore’ sound, while Dave really likes the Frenchcore vibe, so you’re probably going to hear influences of this throughout our productions. We also plan on utilizing Industrial & Drum ‘n’ Bass influences in our future productions. Hardcore has so many faces nowadays, it would be a shame if we would stick to just one particular style.

Last Summer, we saw you performing again at a few festivals. How did it feel to be back on stage again?

We did a few gigs like , ‘Nature One’, ‘Fantasy Island’, ‘Rainbow Rave’ and ‘Experience Festival’.

It felt amazing to be back on stage for the Hardcore audience, and we hope that we’re going to get the opportunity to experience these feelings all over again a lot more in the near future.

We understand that performing every weekend is your goal for the future, Will it be all three of you performing on stage together?

You’re not going to find the three of us behind the decks, Dave and Manuel are the DJ team and the face of ‘Nocturnal Ritual’. It’s possible that if one of them is unable to perform, that Tim will fill in for him. Our plan is to make heaps of new music and get as many bookings as possible. We also hope we can reach the highest possible levels again when it comes to parties and festivals.

Tim and Dave are going to take care of the music production, while Manuel (assisted by Tim) is our main man for Social Media and the website which will be online soon (www.nocturnalritual.nl).

We’re all doing what we love to do and what we’re good at, we’ve all got a share in the tasks for the group.

Well in one of the previous questions, we talked about what you could expect from us on a production level, the same will go for our performances.

You are probably going to hear a lot of different styles of Hardcore in our sets. All precise chosen music, making sure it will fit each other perfectly and mixed tight. So a description for our style is not easy, but if we have to throw a word out there to explain the style we can be booked for, “Energetic” would cover it the most, if you’re interested in what we can perform, just contact our agent and inquire.

Where can you be booked?

We are aiming to join the Concrete Agency, but for now Andrea van der Rhee from Cardiac Music is taking care of our bookings. You can contact her at: info@shop.shop.cardiac.com

We hope you all enjoy what we’ll be doing, and we hope to meet you soon!