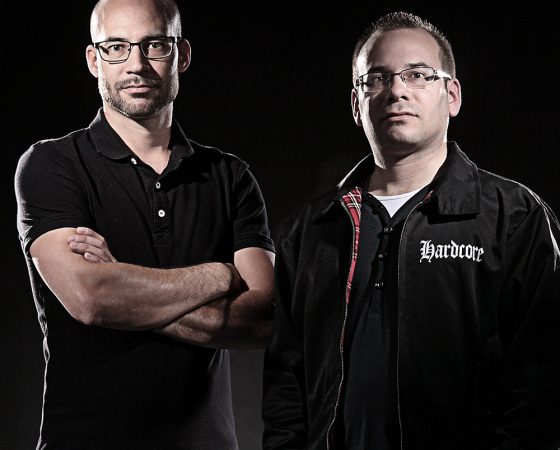 Hey all, we are two brothers Jan (34) and Martin (32) and we are living in the southern part of Germany. We are new Enzyme artists and we answered some interview questions. Enjoy reading!

What inspired you to make music together?

Well we came in contact with Hardcore in the mid-nineties and fell instantly in love with this style of music. Back then we wanted to make our own songs, but always asked ourselves how this music was created as we were pretty young haha.

After a few years we saw that a friend of us was working with Fast Tracker 2 to create his own music. You could say that this was the moment when inspiration hit us!

What genre of music do you consider your work to be? Who are your major influences? And what got you involved in this in the first place?

Our music can be best described as “Mainstyle Hardcore” with all its diversity. Ranging from atmospheric dark vibes and screechy noises, to floor filling melodies…always trying to keep the song interesting from the beginning to the end. Sure Hardcore should always work on the dance floor, but for us it is also very important that it holds the listeners attention when be played anywhere else.

Major influences? Hm, that`s a hard question. There are artists that have our deepest respect like Dj Ruffneck, Ophidian, Angerfist or Tha Playah just to name a few. But honestly we try to not being influenced that much by other artists. Sure we listen to new releases, questioning ourselves how others achieve certain things, but in the end it is important to create your own style.

Like mentioned before, playing around with Fast Tracker wasn’t more than just for fun. Then, as we grew older we began to start producing more seriously.

Regarding the first question the answer is quite simple, we just love this music! Also, after all these years it still feels challenging to produce Hardcore. While most other electronic music styles follow way more rules and boundaries, Hardcore as a whole doesn’t. That’s what makes it such a complex music genre, where as a producer you can try so many different things and styles. Honestly we think that this is one major point why Hardcore is still growing and expanding after nearly 30 years.

Because of the technical aspects there is always a continuous evolution within this genre, which always pushes the sound quality further. That being said, the great thing is that its core message always stayed the same no matter if in 1994 or 2017…it gives the listener and the people on the dance floor a pure and superior feeling! That’s why we appreciate this music so much.

What is it about the way you make tracks that makes it different from the other kinds?

Good question…we don’t know much about how others work and approach their sound. But we think that every artist has his own unique way to create music.

First we think about and decide what kind of track our next one will be. For example, what bpm it should have and what key it should be in. After that we try to prepare all the elements we want to have in advance. Once everything is ready we start arranging the song. You could say, we always have a clear vision in mind before we start, but there still might come a point where some alterations are necessary. It’s not wise to follow an idea that becomes obsolete during the arrangement we think.

What does your artist name mean and where did it come from?

Skinrush should describe the feeling that our music hopefully triggers when listened to. Another word to describe it would be goosebumps but that wasn’t an option for us hahaha! Also, we wanted something short, powerful and catchy that people can easily relate to.

What is the ultimate direction for Skinrush? What are the plans for the future?

We definitely want to produce and release as much music as possible, that’s for sure. There are already some collaborations planned for 2017. But also, we want to learn the art of spinning because producing on a professional basis was always our main intent. We already began first steps with our signature mix which will be online soon. Additionally we want to release a podcast series called “Podrush” at regular intervals!