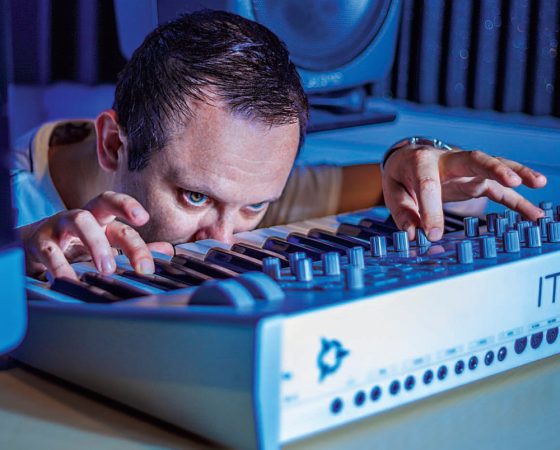 Patrick Van Kerckhoven is considered to be one of the founding fathers of the Hardcore sound. He is responsible for initiating the creation of a sub genre of Hardcore that became known as “Artcore.” He created massive of tracks on his labels Ruffneck Records, Gangsta Audiovisuals, Supreme Intelligence, Tainted Audio and Enzyme Records. Nowadays he’s still ruling the scene with his characteristic Hardcore tracks with Industrial influences. Relive the past or behold the future with the sound of Ruffneck.

Inspired by the House Music coming from Chicago and Detroit, he began his musical career at just 15 years old performing at various clubs around Holland. Most of Europe had not yet been exposed to House, let alone any form of Hardcore.Patrick kept pushing the Hardcore sound throughout the 80′s and 90′s, producing hits such as “Mindcontroller” & ” The Spirit”.In lieu of his DJ and Producing successes, van Kerckhoven started his own record label “Ruffneck Records” in 1993.

This label released over 250 tracks including several major hits such as “Ruffneck Rules Da Artcore Scene” which even managed to hit the European music charts at number 8! After a brief stint making Drum and Bass music with his label “Ruff-teck”, van Kerckhoven continued to craft and create new hardcore sounds. Around 2000 he launched labels “Supreme Intelligence” and “Gangsta Audiovisuals” which concentrated on the newly invented “Darkcore” and “Artcore” styles respectively.

After many ups and downs within the Hardcore scene, he created Enzyme Records in 2001 to make a fresh start. Patrick did all of the work behind the scenes, in order for his roster of artists to grow and gain popularity without having to worry about any of the stigma attached to his earlier projects. Patrick managed to fool the hierarchy of Hardcore and the entire music scene into thinking that he had retired. The truth was that he was busy at work the whole time managing and creating for Enzyme records and it’s many infamous sister labels such as “Enzyme X”.

Currently Patrick runs several of his own record labels that are prominent in various genres like Hardcore, Hardstyle, Industrial and Hard Techno. These musical elements as well as those that cannot be described are all pieces of the unique puzzle that makes up Patrick Van Kerckhoven and his musical vision.